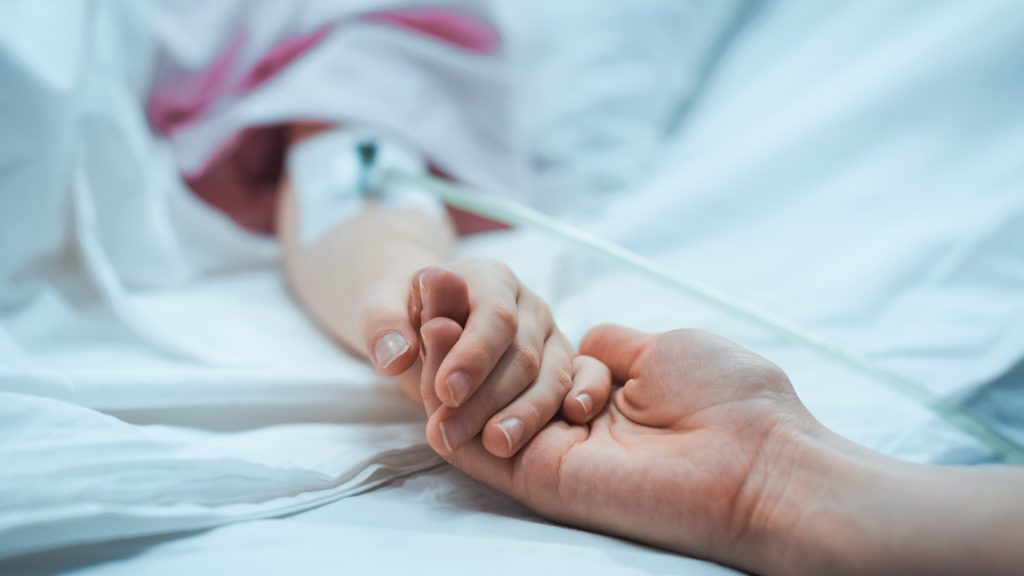 As he hovered near death

It was in the middle of June’s heat when I rushed to my son’s bedside. At twenty-eight years of age, he had been living on his own for several years.

I was on vacation over a thousand miles away when I got the call that something was wrong. I first laid eyes on my grown boy around midnight, after traveling all day.

His previously sturdy body was now frail, his skin an odd translucent white. Vivid greenish-blue veins lined the back of his hands and inner forearms. His dark eyelashes stood in stark contrast to his pale face, and a cannula snaked out of his nose.

In the dark corner of the room, a figure moved. My youngest son stood from where he’d sat in the shadows. “Hi, Mom.”

I gasped, pulled him close, and drew the strength I needed from this embrace. For a moment, he was a surrogate — a stand-in for my eldest.

He stepped back. In his gaze, I saw terrible news mirrored there. “Mom, it’s cancer. Cameron has leukemia.”

A wave of shock hammered me. I staggered but somehow stayed on my feet. Five years earlier, I barely survived when cancer claimed my husband. An aggressive form ravaged this man’s energetic body in five short months.

His eyelashes fluttered, and he struggled to focus. “Hi, Mom.” His voice was hoarse. “You came.”

He struggled to lift his hand to touch mine. “Please stay, Mom. I need you.”

“I’m not going anywhere,” I promised.

Then, Cameron closed his eyes and slipped back into the fog.

Over the next few days, we learned he had Acute Myeloid Leukemia (AML), an adult-onset form of the disease. I joined an online social media group and met patients and families from all over the world. I discovered this cancer indiscriminately struck babies to the elderly.

Cameron’s was a virulent type. His doctor explained he would need four rounds of chemotherapy, and each would require a week-long stay in the hospital. He would be given a toxic mix of drugs around the clock.

His first round of medicine began immediately — that same week. The cancer that had nearly killed him left little energy for simultaneous bodily functions. He struggled to digest food and breathe and faded in and out of consciousness those first few days.

Cameron tolerated the first treatment with ease. There was no vomiting, and his hair didn’t fall out. As the drugs destroyed his mutated white blood cells, he gained strength.

Six weeks later, I accompanied him back to the hospital for the second round. His biggest complaints were about the quality of the food and his struggle with boredom. I sighed with relief when I drove him home five days later. Maybe he was going to be lucky and beat this disease easily.

A few days later, I awoke to the frantic knocking on my apartment door, where I lived in the same building as my sons.

“Cameron’s running a fever!” my youngest blurted. His eyes wild with fear.

Within a few hours later, Cameron’s’ body succumbed to a massive infection. The drugs had done their job; there was no immune system to fight common bacteria. Everything became a struggle — to breathe, to eat, and to be aware.

His blood pressure hovered dangerously low, and he depended on the oxygen mask to force air into his lungs. The nursing staff began to prepare me he may need the help of a ventilator.

Fear gripped me as I felt death walk into Cameron’s room. I recognized its familiar presence; I’d met this spectral as I stood vigil beside my dying husband.

Death already had torn my world apart. The sudden loss of my husband had ripped Us apart. I became an unwelcomed Me. For a long time, I was engulfed in deep sorrow.

But to lose Cameron would be something altogether different. He had been borne from my body, birthed amid blood and pain — bone of my bone. It had nearly cost me my life to give him his, and I had willingly become less so he could become more.

And now he was sick, close to death.

Each night I fell into bed and wrestled with God. Lacking the word to express my heart’s ache, I would collapse into an exhausted sleep, muttering, “please, please…” as my only prayer.

Two weeks later, Cameron wobbled and panted with the effort it took to stand, and he was discharged frail and skinny.

Two more rounds of chemotherapy remained. My heart pounded with fear as he entered the hospital and completed them both, each time becoming weaker. What if he decided the fight was too hard and not worth the effort?

The real possibility that Cameron might die became inescapable. I already existed in a world without my husband. Even if I searched every face on the planet, I’d never find Brad’s. I couldn’t lose Cameron; it would be not survivable.

Cameron’s last treatment was ten months ago. Though there’s no sign of cancer in his blood or bone, we cannot use the word cure for another four years.

Now, I avoid the social media group of leukemia patients and their families; their posts are no longer comforting. It’s become a scary place since those with AML suffer relapses often.

Today he’s healthy and due to arrive at my place in an hour. We are going to eat fast food and watch a movie. During the show, his hands probably will find mine. For a moment, I will enjoy its healthy, firm grip and be grateful.

Surviving this mother’s terrible nightmare has taught me a valuable lesson: Life is best lived now, in this moment. Today.

How to Habit Loop Your Anxiety and Set Yourself Free

A Shocking Gift of Love After Death