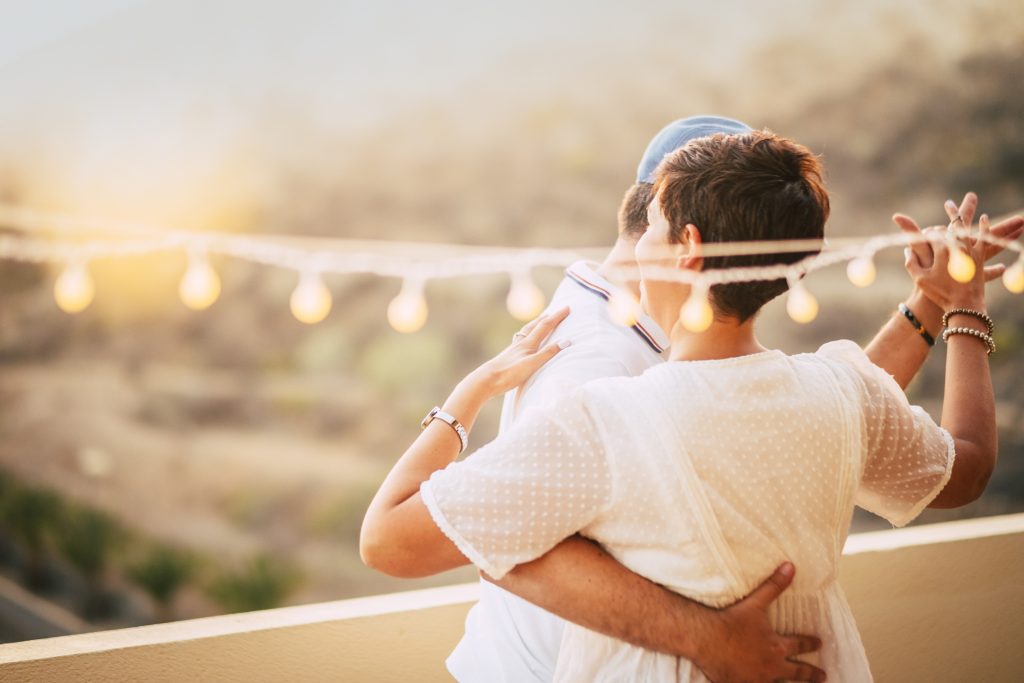 He learned too late that all we have is this present moment.

Brad walked into the bedroom dressed in his khaki shorts and a polo shirt, his white golf gloves still pulled high on both hands. With a big grin plastered on his face, he said, “You know, I think this has been the best year of my life!”

Normally conservative spenders, we had done something out of the norm. Brad had bought a golf membership that year. It was expensive, something hard to justify on a budget.

It wasn’t that we couldn’t afford it, but it was something we rarely did. I was glad he was enjoying the membership. I was holding out for more one-on-one time with him once he retired from his crazy work schedule.

Up until then, we hadn’t been enjoying life. We had been focused on getting ahead and were missing out. Well, maybe I was.

We had big dreams, though.

Earlier in the week, Brad and I had met with the architect to settle the remaining details regarding our new home’s finishes. The blueprint was nearly complete. I’d just hung up from calling the local kitchen appliance retailers to schedule an appointment to walk through their showroom later that week.

The excavator had removed the last few trees on the lot we had bought in a nice subdivision. I planned to walk it soon. I wanted to see what the new views would be out of the house’s front and back.

Next year, with our youngest finishing high school, Brad and I would officially be empty nesters. I had been too hesitant to admit out loud that I was ready to be done with the busy days of parenting. Finally, Brad and I could focus on our relationship. Maybe we could rekindle some of the passion we’d lost while raising kids.

I stood on the edge of a massive change. One I anticipated and thought I had a good handle on. Sadly, I was right about the upheaval heading my way but wrong about the kind it’d be.

Within a month, Brad learned that a sizeable cancerous tumor — extremely rare and always fatal — was devouring his small intestines. Five months later, I sat beside his bedside with his lifeless hand in mine as I said good-bye.

Just days earlier, Brad lay unconscious and dying as his youngest son walked across the commencement stage and accepted his high school diploma. Later that fall, I was the only single parent the day I helped my son move into his college dorm.

Brad and I had fallen in love with the sentimental words of Christina Perri’s song, “A Thousand Years.” At his encouragement, we bought tickets to see her in concert. Two weeks after his death, I sat on the hillside of the outdoor amphitheater he had helped to build and listened to her sing it as an encore. I was surrounded by couples who wore silly smiles, held hands, and rocked slowly in time to the music.

Twin pains of rage and grief ripped through me, that left me gasping. Brad was supposed to be beside me on this lawn. His warm, boyish hands were supposed to be holding mine.

A year later, our house lot was sold. Now, another new home sits on it, and those people’s children ride their bikes up and down that quiet street.

All those future moments we had banked on enjoying during our retirement years disappeared — things like teaching me to golf, traveling through Europe, enjoying a cold beer with friends out on our new porch.

This terrible loss has changed me irrevocably. I’m not the same.

Until Brad died, I’d been not happy. He and I had been pushing hard for financial stability. We wanted to enjoy our later years, so we scrimped and saved. Despite earning a stable income, we turned down nicer vacations and went without luxuries.

We often delayed and postponed opportunities today in hopes of having a better tomorrow. A smart strategy as long as it’s reasonable and doesn’t come at the expense of enjoying this present moment.

But I was. I was postponing my joy.

Tomorrow, wait until tomorrow, I told myself. I believed this practice of self-denial would one day pay off.

Only I discovered too late there would be no tomorrow. At least not with Brad. Many of those moments never presented themselves again. I had missed them in lieu of a distant mirage.

Brad and I will never see Europe together. I will never feel his skin’s warmth again as he traces the letters of “I love you” in the palm on my hand. I will never snuggle close, bury my face into his neck, and breathe his delicious scent.

It cannot be taken back and changed. We can only — should only — use its painful regrets to educate us on how to be better people as we let the rest go.

The future is a lie. Although it’s wise to make plans, we should do so cautiously and with flexibility. Tomorrow is an illusion — always near, but never here. But to live expectantly for it with one eye on what could go wrong is silliness. Most of what we fear will happen never happens.

Facing the death of my lover, husband, best friend, and partner has taught me that most of what we think is important isn’t. We need to learn, to forgive, and then to let it go.

And all the while, hold each other tight because time is short.

All you and I have is this present moment. Here, right now. My life, as it is, is it. This is all that’s real and all that we’ve got. I’ve learned to live as fully and openly as possible. To find contentment from second to second. To find peace with what is, because this is the stuff of life.

Brad learned too late. He grieved as he prepared to say good-bye. He told me he’d worked too hard and missed too many moments.

Shortly before he died, he cried softly, “I’m afraid I’ve fucked it up so badly with you that you won’t want to hang out with me in heaven.” I reached up to wipe the tears as they dripped down the side of his face and then took his hand in mine.

I was sad too. Filled with regret for what could have been but now would never be.

But in that moment, I let the anger go. “Of course I will,” I whispered back.

Brad’s eyes lit up, and for a second, he looked like a young boy in a dying man’s body. “You will?”

A short time later, he died, sad but at peace.

Living With Cancer in a COVID_19 World

Being Widowed is More Painful than Being Divorced

Grieving Stages: It’s Not That Simple