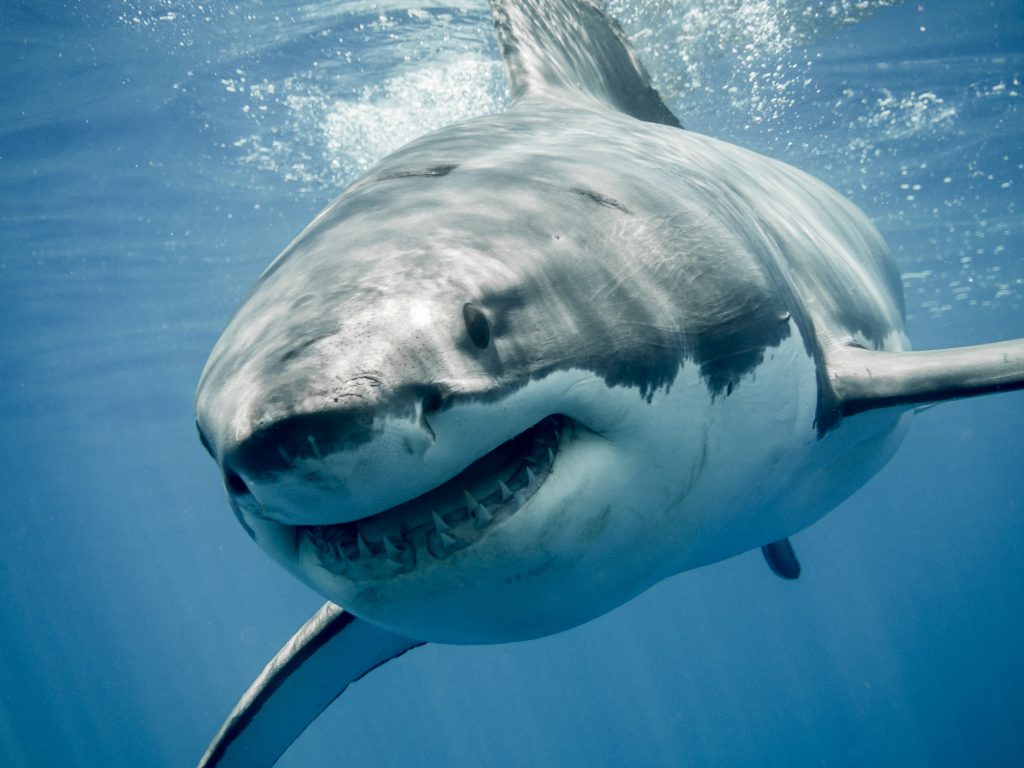 There’s what he says and then what he actually means

You may have heard the old adage, there are plenty of good fish in the sea, when it comes to meeting available men. That may be true, but I’d like to point out that the phrase neglects to say what kind of fish. And be very aware of the online dating shark swimming in that sea!

Groupers? Those guys stick together and swim in packs. Good luck trying to get one of them alone!

Of course, there are the cod. Good ole run-of-the-mill men. The salt of the earth. Maybe a bit boring, but definitely reliable.

Clownfish? Well, goofing around is fun, until it isn’t.

The best type to date is a dolphin. Dolphins are known for their emotional sensitivity and sense of responsibility. This type of guy seems to be in short supply these days.

There is one more type of fish often found in this dating sea. It’s the shark. A dangerous, focused predator with one thing on its mind – you.

Sure, sharks like to cozy up, pretending your interests are in line with theirs. They smile and nod in agreement. “Yes, yes, yes…,” they say. That is, until you give in and give it up. Once you’ve agreed to have sex, it’s over. The next thing you know you’ll be hearing, “Ah, babe, this has been nice. But, uhm, I think I’ll get going. I’ve got things to do, you know.” And just like that, they’re gone.

Oh, you might hear from them again — once the hunger is back. But then again, you might not.

Up until you let them have their way with you, you are like a curiosity or a new toy — all bright and shiny. Fascinating. But afterwards? Not so much. The newness has worn off, the novelty you once held is gone.

I don’t know the contents of your dating pool, but mine is filled with plenty of sharks. The problem is that these predators have learned how to blend in among the playful dolphins, making it difficult to tell who’s who. At first glance it can be tough to know which guy is safe and which is not.

So I’ve put together a convenient guide to common greetings sharks like to use so you can identify them easier.

This comment is a sure sign of a shark who’s on the hunt. Be very careful around this guy. Only venture close from the safety of a shark tank!

“What are you looking for, beautiful?”

Translation: This comment has a couple possible meanings. It might be saying, “I know what I’m looking for and it’s a warm body. Yours will do very nicely,” or it might mean something more innocuous, like,“Hey, I find you interesting and genuinely would like to get to know you better.”

Best to move slowly with this one. Make no sudden moves until its intentions become clearer. Once you’ve have a few more conversations, you’ll know if this guy means you well or not.

“I want a relationship too, but I’m in no rush.”

Translation: “I’m here for one thing and one thing only…and it’s not to get to know you. Shall I spell it out for you? S-E-X!”

This thinly disguised shark is hoping it can trick you with its deliberate use of the buzzword: relationship. On closer inspection, however, you will see that this word choice is an attractive lure. He’s hoping to reel you in with the promise of something more. Watch out, though, it’s a trap.

“Life is too short not to be happy.”

Translation: “Well, I don’t know if having sex with me will make you happy, but it sure will leave a smile on my face.”

This is a lazy, self-absorbed type of shark. Don’t fall for its vapid, shallow explanation. It’s just a hookup dressed up in cheap sentiment.

“I’d like to meet since I don’t want to waste anyone’s time.”

Translation: “I think building a relationship is a waste of time since that’s not what I’m after. I’m here for something quick and fast. You interested?”

This type of shark lacks the stomach to state his intentions outright. Don’t mistake his urgency as anything but sexual hunger. He’s looking for his next meal.

Translation: “I am your man for at least tonight. We will have to see how I feel in the morning before I’m willing to commit to more.”

This fun-loving, enthusiastic shark sees his sexual pursuits as part of a grand adventure. Well, at least it is for him. He lacks the self-awareness to realize he’s leaving a trail of broken hearts. Please don’t fall for his happy-go-lucky cheerfulness; it’s just a charming cover for selfishness.

“What are you doing right now?”

This shark is trolling for chump and you just happened to be in the area. He’s hoping you won’t notice that his interest isn’t in you, but in your body.

Over these past few weeks, I’ve dipped my toe back into the waters of online dating. I’ve given each man I’ve met the benefit of the doubt and tried to get to know him better. What does he want out of life? What are his hopes and dreams? What he’s looking for in a partner?

Likewise, I’ve assumed he’s there to get to know me too.

One more time I’ve discovered this scenario is often not the case. At least not for guys I’m meeting. Too many of them are using online dating as a convenient way to find a hookup.

Those of us who are hoping to meet a someone looking for a long-term relationship need to develop the skills to distinguish between the sharks and dolphins. If we’re savvy and listen carefully, though, we will soon learn to tell the sincere guys from the hungry ones who are looking for a tasty snack.

How My Dating Life is Being Ruined by the Hookup Mentality

The Art of Online Flirting: Seductive and Fun