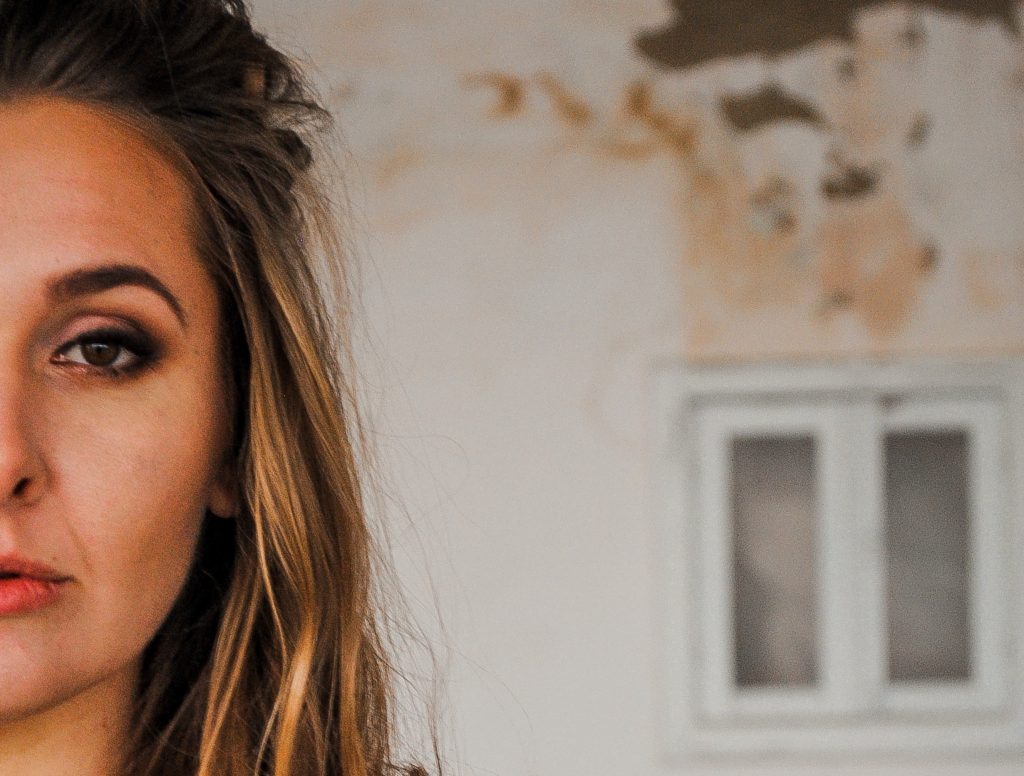 It’s another hot day in Texas. I put on a bathing suit and head out to sit on the patio, where I can enjoy the poolside view. Looking sideways, I catch a glimpse of myself reflected in the sliding glass door. There I see an overweight, middle-aged woman staring back at me.. There’s a familiar surge of shame and self-loathing I’ve felt through the years as I’ve battled poor body image.

My Battle with Poor Body Image

I have battled a poor body image for as long as I can remember. As an awkward fifth grader, I first began to worry that I might be overweight. My family had moved to a farm, fulfilling my dad’s life-long dream. This change created problems for me; I wasn’t doing so well at my new school and was struggling to make friends.

About then, I discovered the bathroom scale and began to weigh myself. Alarmed, I watched the number on the dial creep past one-hundred pounds. No one told me I was gaining muscle mass from all the hours I worked each day feeding livestock and doing farm chores.

Influence of that Day’s Culture

Looking back, I now realize I was chunky — neither fat nor skinny. Hours of hard labor hauling pails of feed were adding bulk to my developing body. With Twiggy and Farah Fawcett of Charlie’s Angels the fashion craze, my short, boxy, flat-chested body didn’t conform to popular definitions of beauty. I was awkward, nerdy even. My wire-rimmed glasses and mouth full of braces and outdated orthodontic headgear did nothing to help the situation.

My mom, with her own body-image issues, became concerned about my weight and decided to do something about it. Community resources were limited in the early 1970s. There was no online support, obviously, and the Weight Watchers program was too new to be available in rural areas.

She decided to take me to the next best thing, a local weekly support group called TOPS (Take Off Pounds Sensibly).

I still remember the first meeting I ever attended. My heart picked up and raced as my mom parked the car out front of a small neighborhood church. A few other vehicles pulled in about the same time. I scanned the occupants, fearing I might be recognized, and let out a sigh of relief when I saw no one I knew.

Mom grabbed her purse and urged me out of the car. I hung behind her, trying to hide, as we made our way to the entrance. We stepped into the church’s small foyer and headed to the basement. There, a line of women snaked out of the large common area. They chatted and joked with one another as they waited.

My mom bent low and whispered into my ear, “We’ll weigh in first, and then there will be a short meeting. The goal is to lose weight each week. If you’ve gained, you will get charged a few cents as a penalty. Today you will just weigh-in since it’s your first meeting.” I nodded my head to show I understood as I scrutinized who was in attendance.

Looking around, I saw no other middle-schoolers or teenagers. I was the only minor.

Most of the other women toted a baby or two, wore their hair up in a ponytail or a bun and were dressed in a long, shapeless garment.

It was a hot, muggy summer evening. Many of the women had picked up last Sunday’s church bulletin and were slowly waving it back and forth in front of their faces. Wet strands of hair clung to their necks as beads of sweat dripped down the sides of their faces.

The line inched forward. Each woman took a turn and entered a small side room and then exited a few minutes later. Some appeared happy, others downcast as they fumbled to put away their coin purses.

Our turn was next. Mom and I walked into the room together. In the center of the floor was an old-fashioned scale — the type found years ago in a doctor’s office.

A woman sat at a folding table beside the scale. At the sound of our entrance, she looked up and greeted us warmly. She held her pen poised over a notebook filled with a list of handwritten names followed by a series of numbers.

“This is my oldest daughter,” my mom said by way introduction. “It’s her first meeting.”

The woman smiled broadly. “Welcome to TOPS! We’re so glad you’re here!” Her syrupy warmth felt like too much. “Why don’t you step right on up here and we’ll get your starting weight,” she said, gesturing toward the scale.

I stared at the apparatus, mortified. There was no way I wanted some strange woman weighing me, or for my mom to see the results.

My eyes darted around the room, hoping to see some exit, before resigning myself to the process.

“Stand still,” the woman said as she moved the counterweights. “Okay, you can get off now.” I scrambled away in relief, just to hear her announce my weight. My cheeks burned hot in shame.

My mom went next. The buzzing in my ears was so loud I couldn’t hear what was said next. I watched my mom take a few coins from her purse and hand it to the lady. She cracked a joke to explain her small gain.

For the next hour, I zoned out. Waves of shame made it impossible to focus on the meeting that followed. Instead, I stared at the women seated around me, wondering how a chubby middle-schooler fit in with these older ladies. I was relieved when an hour later we finally pulled back into our driveway. I then fled for the safety of my bedroom.

I got the message. Loud and clear. My body was disgusting. This was my first conscious awareness of poor body image.

For the next six years, I restricted my diet. I battled waves of intense hunger as I skipped meals, avoided snacks, and rejected second helpings. Most days, I survived on less than eight-hundred calories. Less than half of the daily requirement for my height. Despite this effort, I could never achieve the skinny-model look.

From birth, I have been bombarded with ads, commercials, movies, and TV shows that equate a woman’s value with her degree of skinniness. I watched my classmates and peers gravitate toward the thinner, more comely students. My heavier type of body has made me feel cumbersome and awkward.

I wish I could say we live in a kinder world today.

Body-image bias still persists. Some of the men I’ve met on dates take one look at my plus-sized body and are done. This is after I’ve clearly stated I’m full-figured on my dating profile. We might as well end our appointment before it has even started since getting to know one another is a waste of time. It doesn’t matter if we strike up an interesting conversation. They have already decided I’m too fat.

The not-so-nice men tell me that my lack of perceived attractiveness is my fault. All it would take to achieve thinness is for me to buckle down and work harder. To restrict my food intake more. To exercise longer and more frequently.

Doing the Best I Can

Here’s the thing: my diet is already sensible, and exercise is a regular part of my lifestyle.

What people don’t know is that every day is a battle with chronic pain. I wrestle with arthritis in both hips and my lower back brought on by years of childhood farm labor. I struggle with severe PTSD due to extreme childhood sexual abuse. I often live on three to four hours of sleep a day from an overly-stimulated nervous system.

Lately, there has been plenty of talk about body positivity. But frankly, I don’t see it. To me, the world feels much the same — I am still an invisible woman in this image-crazed culture. I continue to be dismissed by men as not worth knowing.

For the most part, this is okay. I’ve never known it to be any different. And from I hear, being attractive brings another set of problems since most of it is sexually dehumanizing. Honestly, I no longer care — their loss, not mine.

My Wish for Myself

I would like to experience what it feels like to be comfortable in my body. To be completely self-accepting. To live without self-consciousness. I can’t imagine what that experience would feel like. To know such freedom. Is it even possible? I don’t know.

I’ve taken one step in the right direction, though. I recently bought a full-length mirror for my home — something I have never owned before. Each day is counted as a victory if I can stand in front of it and admire how I look. Maybe one day, I will look at myself and be pleased. Perhaps there will come a time when I won’t have to work so hard to like what I see.

How Being Ghosted Improved My Life

How My Unconscious Mind Keeps Messing Up My Dating Life

The Problem of Not Taking a Man at His Word