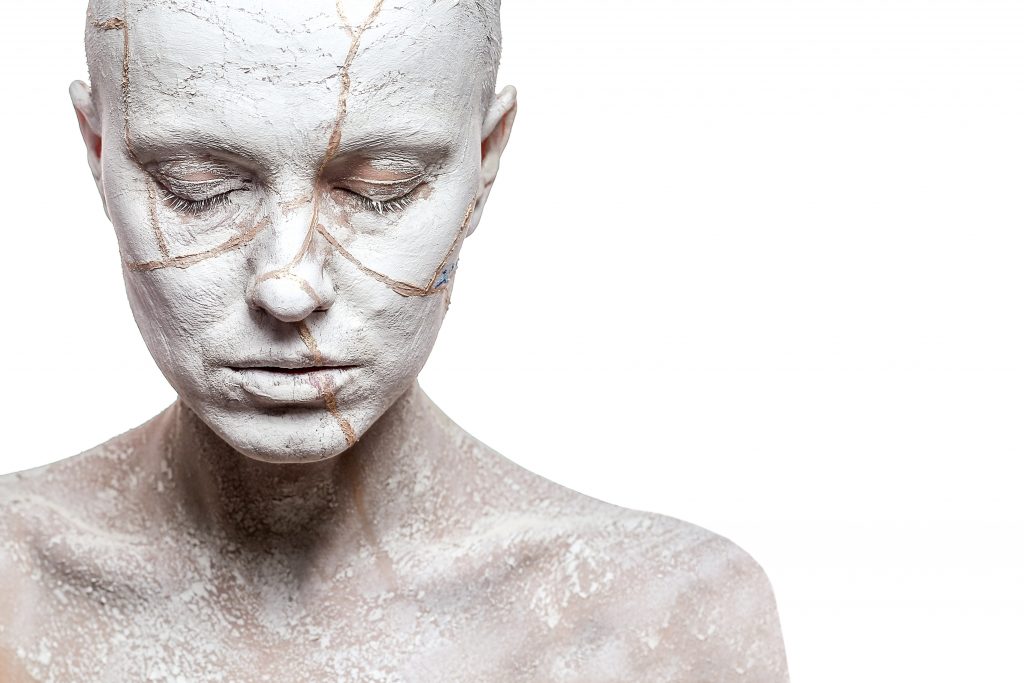 Trying to re-integrate my fragmented self into someone whole.

Sticking up for myself is hard. I’m still trying to find my voice. I’ve heard many women complain that they have trouble asking for what they want or need too, but it’s particularly challenging for me. When triggered, I react by becoming oddly submissive, an old coping mechanism I learned to survive while being assaulted.

This past week, it happened again; I failed to protect myself.

How my sense of self fragments when triggered

I met a guy online, and we spent the week texting and talking on the phone. He was friendly and helpful, all of which disarmed me. He seemed like a great guy. A man who felt familiar and trustworthy, leaving me ill-prepared to meet someone aggressive. Someone so pushy he was french kissing me within the first five minutes of the date.

He was emotionally manipulative as he pressured me to accommodate him. I felt trapped.

As he progressed, I thought:

“Do I take an assertive stance, risking this guy possibly berating me, or do I go along with his suggestion?”

Difficult to Find My Voice

As the internal pressure built, I split or fragmented into two versions of me: the person-in-the-moment, I’ll call the Actress, and then the-watching-person, who I’ll refer to as the Observer.

The Actress was in charge. She carried on a pleasant conversation, smiled at all the right moments, and amenable for the most part as her date danced with her, held hands, and kissed her. She seemed cooperative and as engaged as he. Like a marionette, she behaved sweetly and kindly.

Meanwhile, the Observer within me watched in numb horror. Dressed shabbily and with an unkempt appearance, this guy disgusted her. A faint ripe smell of body odor wafted about him. As he leaned over and kissed her, the Observer felt the urge to vomit. She recoiled as he pulled her into an embrace and began to dance.

Then, the Observer became increasingly upset by the emotionally coercive nature of the conversation as her date put her on the spot with loaded questions. “You don’t mind if I do (x,y, or z), right?” he asked.

Each time he set her up, she silently told the Actress to respond assertively. “Tell him, yes, you do mind!” she’d whispered, only to hear the Actress uttered the opposite of, “Oh, of course not!” She watched helplessly and in shock as the Actress played along and behaved the part of a pleasing partner.

The Observer demanded the charade stop. She begged the Actress to end the date early. To tell this guy to go home, but the Actress refused.

The two parts of my fragmented self, the Actress and the Observer, having fought one another the entire evening, left me exhausted. As I processed what had happened, I couldn’t believe how I’d handled things.That I couldn’t find my voice once again. The Actress’s acquiescence made me feel ashamed.

And, I now had to figure how to re-integrate the Actress and the Observer back into a unified, cohesive version of myself once again. All of which created the perfect setup to further self-sabotage by turning to food or alcohol. That night I did neither; instead I went to bed.

Past trauma becomes trapped in the “Now”

In many ways, parts of myself have remained stuck in the past. The leading researcher in trauma, Bessel van der Kolk, Ph.D., writes, “Being traumatized means continuing to organize your life as if the trauma were still going on — unchanged and immutable — as every new encounter or event is contaminated by the past.”

I am an early childhood survivor of severe sexual trauma.

For two years, an older male cousin repeatedly assaulted me when I was only a preschooler. That experience has profoundly shaped the person I am today. It’s left me with triggers I’m still battling.

How Being Raped as a Preschooler Affected Me and What I’m Doing About It
It’s hard work, but I’m finding the inner strength to stand up for myself

As if I’m no longer in control

The type of trauma I experienced is classified as one without agency or sense of ownership, meaning I lost all control over what was happening to me, and my body no longer felt like my own. I began to feel not human, but rather as a malleable doll or like a tool in someone else’s hand.

To cope with such a massive violation of one’s body and self, Janina Fisher, Ph.D., explains that young childhood victims learn to submit, freeze, flee, fight, or plead for help. But these survival mechanisms get split off and frozen in time.

Dr. van der Kolk reports, “We have learned that trauma is not just an event that took place sometime in the past; it is also the imprint left by that experience on mind, brain, and body.”

I’m sure my passivity during this past date appears irrational and maybe even weak. My closest friends have wanted to know why didn’t I tell that type of guy off. I should have kicked him out and been more assertive.

But I couldn’t. I haven’t learned how.

Being physically and sexually assaulted by an older, more muscular adult taught me learned helplessness. I was powerless as my attacker forced himself on me. Resistance was futile. The only option left to me was to hide. And when that didn’t work — to submit.

Trying to break free and find my voice

Unfortunately, there are times when I still submit, even though I’m not in the same situation or the same person. It as if I’ve forgotten I’m a resourceful adult and I become that scared four-year-old all over again.

Thankfully, the split of the Actress and the Observer doesn’t often happen these days, but I hate it when it does. It’s like I’m immobilized within a solid substance, unable to move or to be true to myself. For those moments, I feel as if the essence of myself becomes trapped like a dragonfly in amber.

I’m trying to break free from its grip, with all my strength.

It’s still nearly impossible, but there are signs of progress. I am writing it here. Bravely and boldly. And that’s a big step when for someone who spent much of life emotionally frozen and paralyzed.

Social Distancing Isn’t New, We Do It All the Time to Victims