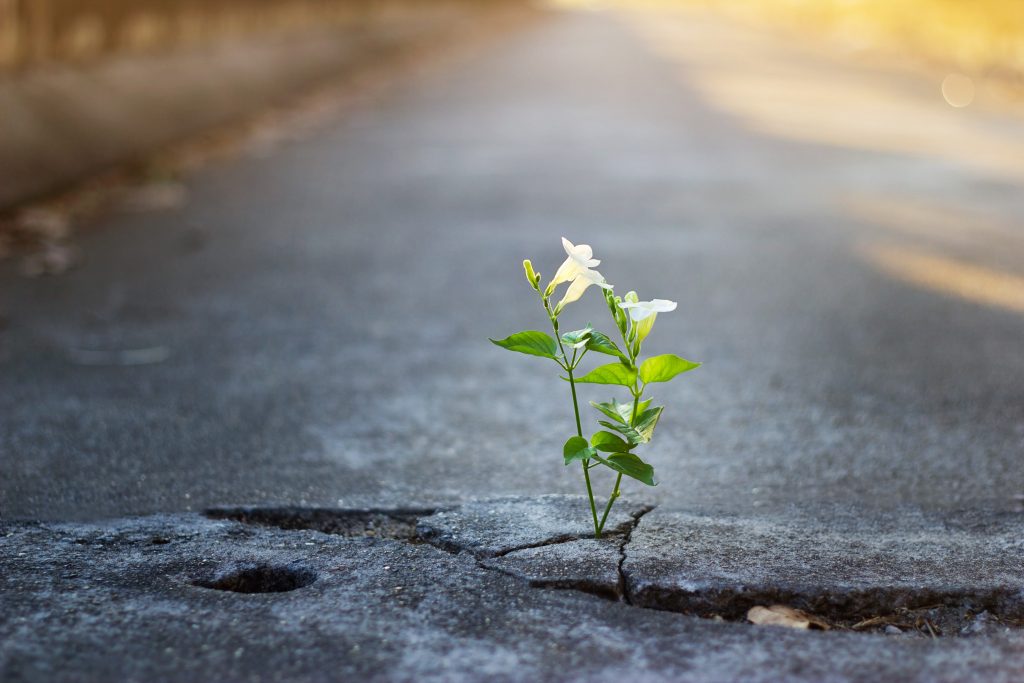 It's hard work, but I'm finding the inner strength to stand up for myself.

Today I’m flying home in the midst of the coronavirus scare. I’m grateful for the medical mask that covers most of my face. It’s doing more than protecting me from the spreading epidemic; it’s hiding my tears. Being raped as a preschooler has one more time haunted my day-to-day life.

I’m shaken. Rattled to the core. It happened again. One more time a date didn’t listen to me. He then disrespected my boundaries and took advantage of the situation. No, we didn’t have sex, but he kissed me, invaded my space, and verbally coerced me so that I felt forced to choose between hurting his feelings or sacrificing mine.

I hate how weak I feel in these situations. A part of me stands outside of myself and watches my pathetic passivity. My behavior angers and shames me. I’ve been a fool, I think.

There’s a reason for the passivity, though. A very good one. It’s something I don’t usually share because it’s too awful.

But I’ve decided to divulge it here. Maybe telling my story will break the emotional inertia I feel when cornered by an emotionally aggressive person. Even better, maybe it will help someone who reads this piece.

My story of being raped.

It started when I was only four years old. I began to regularly be raped by my babysitter, a teenage male cousin. For two years he violated my body at every opportunity.

Deep inside me is a terrified preschooler. She’s frozen in time and unchanged despite the years that have passed. Trauma has a way of doing that.

Her fragility makes me want to hold her tight in a protective mental embrace. To keep her out of the cold, dispassionate glare of the world.

See, I went through something no one should ever be asked to endure. Something so horrific, my family only refers to it in hushed voices and then in code words. It’s been relegated as unspeakable.

It’s hard to describe what being raped was like. Preschoolers don’t have words for those body parts, and this is outside the normal experience of their day-to-day life. How can they tell someone something terrible is happening to them when they even don’t know what it is?

I experienced savage, selfish violence. There was searing pain in the most intimate parts of my anatomy each time he attempted to push his adult-sized appendage into my young body. With every attack, I was sure I would be ripped apart and left bleeding. But he’d stop and withdraw only to try another position with a different angle to see if there would be greater success. Like a doll, my tiny body was moved this way and that, as I wept and pleaded for him to quit.

As my parents left for their evening shift of work, I lived in indescribable fear. Would he attack again tonight? Would he finally succeed in killing me this time?

I tried to stop being raped the best I knew how. Maybe if I stayed small, I’d become invisible. So I moved to the corner of the room, hoping to blend in. I looked for tucked-away places where I could hide, such as under the coffee table or the bed. I even eyed the large grandfather clock that sat in our living room and wondered if I could fit into its belly.

Pretending to be asleep never worked, but I figured it didn’t hurt to try. Once I evaded him by squatting in the middle of a cornfield. I still remember the funny rustling sounds the long leaves made as he walked within several feet of me.

I, however, learned to disappear inside of myself. I would mentally float around the top of the ceiling, detached and numb, watching the ravaging of my tiny body below me as I listened to the sounds of my sobs.

Effects on my daily life

Time moves differently for young children. It’s marked by events, such as birthdays, holidays, and summer vacations, rather than by dates on a calendar or the hour hand on a clock. in terms of being raped, life for me was Before and Now. I had to figure out how to survive the Now until it became a part of my past.

Meanwhile, I navigated all the normal stressors of life, such as the first day of school as a Kindergartner, having my first school photo taken, and figuring out how to make my first playground friend. I did all these things while I endured the regular invasion of my body and my sexuality.

Adults find rape to be a nearly intolerable violation, often requiring years of therapy. I lacked the cognitive maturity and emotional resources most adults possessed, yet I had to tackle all these hard firsts while undergoing severe violence.

And, I did it silently and without help.

Why didn’t I tell?

Why didn’t I say anything? That I was being raped? Didn’t I have loving parents who have taken immediate action? Yes, I did. But here’s the thing — despite his age, he was a consummate predator.

If I became too loud in my whimpering, he would hiss in a low voice how he’d hurt me and my family if I ever told. He backed up these threats. When in a foul mood he once wadded up one of my socks, stuck it in my mouth, gagging me so I’d shut up. Another time, for fun, he lit the car’s cigarette lighter and pushed it against my skin, burning the back of my arm. I got the point. So for a long time, I didn’t say a word.

I learned to be quiet, to be compliant, and to avoid drawing attention to myself. I became pleasing, hoping my fawning would ingratiate me to him so he’d take pity and leave me alone. I shied from wearing body-contouring clothes since it might attract unwanted attention.

For a long time, I wondered why I deserved the torture of being raped. Was I bad?

Then I considered if I had done something displeasing or deserving of punishment. Maybe I wasn’t lovable or worthy of protection.

Two years later it stopped as suddenly as it started. With a rudimentary idea of sexuality, I finally was able to muster up tremendous courage and told my mom what had been happening. At the age of 6, I mistakenly thought I could become pregnant. And just like that her work hours changed, and it ended.

I carried on as best I could. But this was the 1960’s, when there was little in the way of child protective laws or the resources to help severely traumatized children. By then I’d become an awkward misfit who became anxious when conversing with my peers. The window of opportunity when children learn the rules of social interaction had passed. My classmates had all paired up in friendship, leaving me on my own.

I became a playground bystander who watched other girls play. I listened with envy as my fellow students bragged about their most recent birthday outings and slumber parties. I was left to cope with massive triggers and overwhelming fears.

But I made it.

Effects of being raped on my adult life

It’s been a long journey, full of many stops and starts. I have been in and out of therapy since my college days. Sometimes for a few sessions, other times for several years. Facing a profound sense of shame and deep-seated fears has been tough. I can only handle it a bit at a time. Currently, I’ve found an amazing online group for betrayal trauma survivors, where I video conference for three hours a week with other women like me.

I’ve worked hard to get here, but there’s more work to do. The disaster of my last marriage to an abusive serial cheater shows how much I still need to discover, to learn, and to master. And my most recent date demonstrates how strong the pull to freeze and fawn is whenever I feel threatened.

I’m still way too nice too much of the time. It’s hard to be confrontational and direct after experiencing two years of hostage-level threats and abuse. During the critical early developmental years, I was trained to be compliant and cooperative. Research suggests my then-young brain has been hardwired differently. I’m hyper-alert, overly vigilant, and find it nearly impossible to confront aggressive or intrusive people, especially men.

I’m sure I appear polite, sweet, cooperative, maybe even willing to the men I meet. What they don’t realize is that when facing a possible threat, a type of emotional paralysis grips me to such a point that self-advocacy becomes extremely difficult.

That’s what happened during my most recent date.

I’m sure he thought I was having a good time. Only I wasn’t. I was agitated but didn’t know how to confront him or the situation. Instead, I did what I learned to do all those years ago — I endured.

Once the situation was over, feelings of unbearable shame and self-loathing flooded me.

This time the ending was different. I finally broke through and changed the old narrative. Though I’d remained stuck in passivity throughout the six-hour date, I found the strength I needed to confront him with the truth the following day.

It happened when he texted and asked “What’s up? Why haven’t I heard from you?”

I told him. I texted back my side of the experience to which he blew off without an apology.

Sure, there’s a lot of room for more growth.

Some of my dearest friends have suggested I stop dating. Yeah, I could. But how would I practice standing up for myself? Sure, I could be more forthright with the grocery bagger or the Uber driver, but those are low-risk situations that are much easier to handle. I believe it is only through conscious practice that I will be able to chip away at my now-ineffective early survival strategies.

During those horrific two years, those survival tools helped by giving me a tiny semblance of control in an intolerable situation. But no longer. Now, they are a hazard to my mental and physical safety.

No, it’s time for me to begin to handle threatening situations differently. Time for me to assure that terrorized little girl who lives inside of me that I’m adult now. For her not to worry — I got this.

After Silence online support for survivors of sexual and rape abuse

Betrayal Trauma Recovery for partners of sexual addict and abuse

Social Distancing isn’t New, We Do it All the Time to Victims


Have you ever wondered your relationship goes beyond toxic? Maybe it’s even dangerous? Signup for my email updates and receive a complimentary quiz, “Is Your Partner Difficult, Dangerous, or Both?” as my way of saying thank you.

Any cookies that may not be particularly necessary for the website to function and is used specifically to collect user personal data via analytics, ads, other embedded contents are termed as non-necessary cookies. It is mandatory to procure user consent prior to running these cookies on your website.