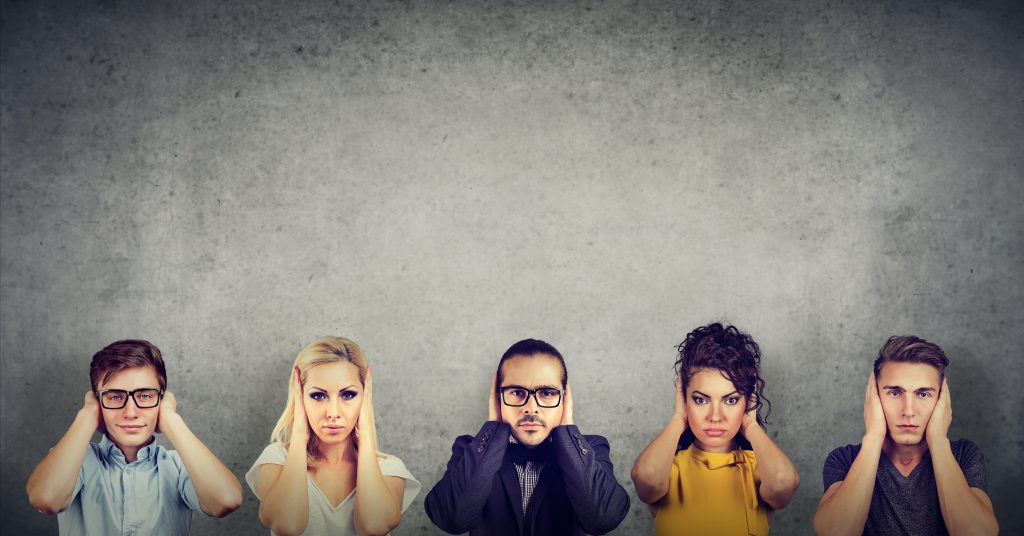 A closer look at why we might silence victims

Have you noticed it’s hard to listen sometimes? That gets tough to stay tuned in and invested when the story takes a dark turn?

Recently, I told a friend that I’ve decided to put my last writing project on hold. It’s the second draft of a manuscript that describes the traumatic events that led up to my divorce. He had heard much of the story, including the psychological abuse, rampant betrayals, and the threat on my life.

My friend listened and then grew quiet. “Can I say something?” he asked.

“I’m struggling to believe what you’ve shared is true. It seems so extreme. It must be an exaggeration.”

Horrible waves of shame washed over me, along with a monsoon of self-deprecating comments. It was stupid to have told him. He didn’t need to know. I should have kept this to myself.

His words hung in the air between us. And for a moment, I considered crossing him off my list of friends.

The Pain of Denying Another Person’s Reality

One of the worst things we can do to a trauma survivor is to tell them are finding it hard to listen to their story.  That what they’ve described isn’t possible. That it couldn’t have happened that way. They must be distorting the facts.

Most victims’ cries, protests, and pleas are muted and minimized by the very ones doing the injury. “Shut up, I didn’t hit you that hard” or “There you go again, making a big fuss about nothing!” are two common examples.

We become a part of the system of abuse when we deny support and validation. Victims are re-traumatized when we shut them down or turn them away.

It’s Hard to Listen to Trauma

For a long moment, I considered what to say next to my friend. Stories of abuse I’ve heard as a psychologist replayed. Many of my former trauma clients had complained about this kind of response. They even heard it from those they loved. And over time, they grew reluctant to talk about what they went through.

One woman didn’t speak for over a year. Each week she’d bring her poetry to the counseling sessions and ask me to read it aloud. Her written words said what she couldn’t. She’d experienced too much rejection and fear and lived in silence about her abuse.

I considered trying to prove the validity of my story. But how could I? It was just my word.

I thought of the client who had been hospitalized with delusions. Once on medication, all of his false beliefs disappeared except for one. He persistently claimed someone was trying to kill him.

The treating psychiatrist was sure this was a residual delusion. The hospital finally had no choice but to discharge him. A few weeks later, the local newspaper ran a story of a drug ring that had put a hit out and named our former client as the target.

He’d been telling the truth.

Or the young boy I treated for over six months whose face once graced the side of a milk carton. His father had kidnapped him and then fled the state. They found the seven-year-old months later, neglected and in terrible shape.

Awful things happen to a lot of people. We survive car crashes, violent and sexual assaults, and abusive homes. No one asks to be victimized. To feel the horrible choking sensation of terror as it paralyzes our body with fear. No one wants to have to survive unspeakable violations.

I’m curious. What motivates some of us to judge the veracity of another’s story?

Imagine you tell a friend about your latest breakup. How much it hurt, and that you still miss them. Then you hear those details don’t sound plausible. That you are probably making it up or it couldn’t have been that bad.

Or you share you got a new promotion only to hear it’s not possible.

When we deny another person’s reality, we insult them. We do them harm. We imply that we have the inside track on reality and get to deem what is true.

A Closer Look at Why It’s Hard to Listen

I shared a few of these stories with my friend.

He grew quiet. Several minutes passed and then he said, “I’ve realized that that was quite a privileged comment. To suggest that I know better. I have been pretty damn lucky not to have gone through some tough stuff. But just because it hasn’t happened to me, doesn’t mean that it couldn’t have happened to you.”

Yes, I agree; that’s partially true. He has lived an awfully privileged life not to know any of this. But there’s more going on here than just a privileged attitude.

We treat emotional support like currency. And there’s only a limited amount.

“You act like you’re the only one this has happened to. It’s happened to a lot of us,” someone once said to me. You could hear the concern in her voice that there was a limited amount of compassion, and I was taking too much. It’s as if investing in someone’s pain might leave the rest of us with less support.

Trauma also reminds us of our helplessness. We cannot control every aspect of our lives, especially when it comes to our safety. We feel better pretending this scary reality isn’t true. Victims, unfortunately, causes an uncomfortable breach in our defensive state of denial. Their suffering forces us to recognize that bad things do indeed happen to good people.

An important part of a trauma survivor’s healing is to retell their story as many times as needed. We stunt this process when we shut them down.

But it’s worse than that. Our rejection of their story wounds their psyche. As someone who has suffered by being silenced, it is a violent act. Shutting someone down deeply injures them. There is nothing loving or helpful about it. It’s selfishness.

The next time someone trusts you enough to share their story, consider it a sacred trust. You are being honored with something vulnerable and being invited to become a part of their healing. Please treat that way.

Are Women Responsible for Some of Men’s Bad Online Dating Habits?