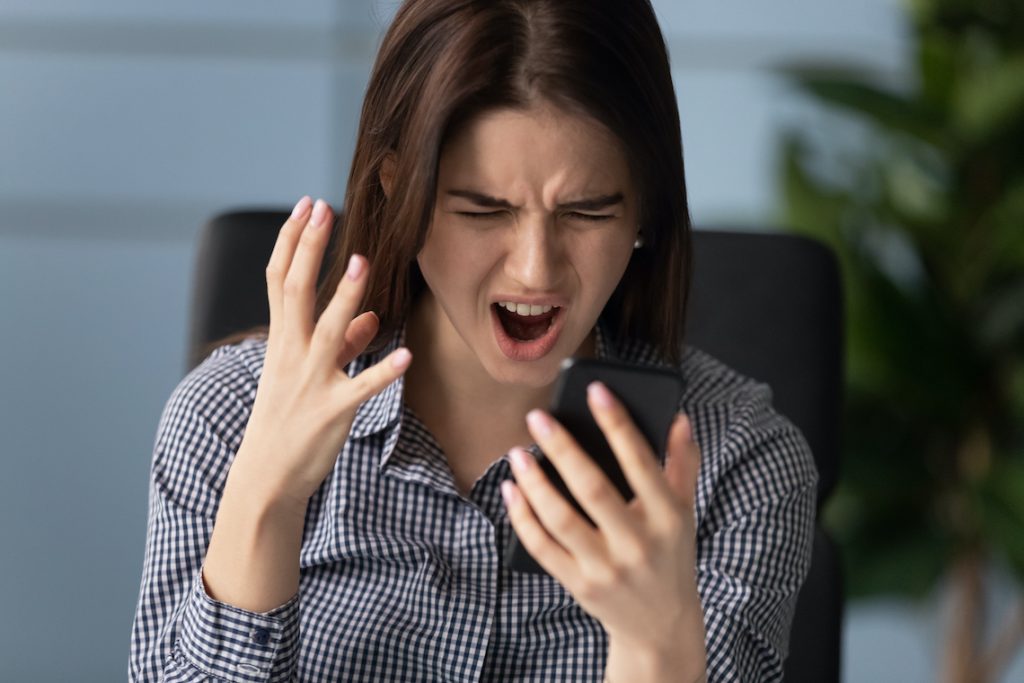 And what does it say about our culture that the attack occurred right along gender lines?

A notification alert popped up on my phone. Opening the notice, I saw that someone had left a comment on one of my recent articles. He shared that he related to the topic.

One of my social apps then pinged with an incoming message. The commenter had found me on another social media site. Again, although that doesn’t happen often, it’s not unusual. We chatted about what I wrote. About what he liked. He told me a bit about himself. My answers were short, such as, “Yeah,” “Ok,” or “Cool.”

I know not all writers respond to their audience, but I decided years ago that I would. Getting to know my readers has had unexpected benefits. I’ve made a few friends, learned a couple of new things, and built a solid connection with many people.

I was sexually exploited.

As we chatted, I glanced at the time and saw it was late, so I started to wrap up the conversation.

He sent me another message, “Kerry…”

Shock flooded over me. My hands started to shake; my mind went white as common sense fled. His notifications continued to pop up with updates on his activity. I averted my eyes, but in a state of distress, I’d forgotten I could have closed the app and muted the incoming messages.

He finished, and texted, “Thanks,” as if I’d participated in his experience. Then he disappeared. The next day he wished me a “Good morning, and then sent me one more message, “I apologize for the end of our conversation, it was just one of those days yesterday.”

Really? That’s all that that was? It was more than that to me. This guy involved me in one of his sexual experiences. Our conversation had excited him. He had masturbated as we chatted.

Honestly, what he does by himself is his business, only he didn’t leave it there. He took it one disturbing step further. He wanted me to play a role.

Why isn’t this criminal behavior?

I know this because I asked. I posted the question online and received several interesting responses, all from men. According to a Canadian attorney, since it didn’t happen in person, a crime hadn’t occurred. I had the option to tell him off, disengage, or block him.

Most of the people who offered an opinion about the problem sounded angry. You’d think I’d shaken a hornet nest. Or that I’d peed all over their man caves. How dare I suggest some men might be engaging in nonconsensual sexual behavior. We all know how rarely that happens, right?

The degree to which my question inflamed these respondents’ ire surprised me. One guy called me a prude for broaching the topic. I heard that I should have closed the app (I was in shock and forgot to do that), muted the guy, or turned off my phone. In these guys’ minds, I had the power to leave the conversation.

To even equate what happened to me as violence upset these men. One guy wrote, As a survivor of actual sexual assault, I ask that you not diminish the term (online sexual assault) by using it inappropriately.

These points are valid when the world operates rationally. When I have complete control over all my faculties. Psychological shock, however, strips us of clear thinking.

As the body prepares to meet its threat, the prefrontal cortex, the thinking control center, goes offline. The amygdala, the danger-alert center, takes over and goes on high alert. The body is then flooded with hormones as it prepares to meet the threat. During these moments, thinking becomes impaired and may result in a sudden, illogical, and irrational overreaction to the situation.

Logic does not resume until the overcharged body and the hyperalert mind calms and returns to the previous state of functioning.

I wasn’t able to make rational decisions during that distressing sexual incident. The shock of being used for nonconsensual sexual gratification had diminished my ability to protect myself.

Why all the male anger?

But the men who responded to the question I posted on social media assumed I was in full control. Their anger at my insistence that I was incapacitated is puzzling. One wrote, ‘Online nonconsensual sex?’ Please enlighten us. How does that work? When you observe something long enough to claim to be offended by it, you have provided your consent. You were only affected by it because you continued to view or read it.

Why the forgetfulness of what happens to all of us when we enter a state of shock? Why the double standard? Would there have been the same level of criticalness leveled at me if I’d been in a car accident?

There are two glaring issues: our cultural refusal to see some types of online behaviors as unacceptable and our difficulty in providing support to the affected, disempowered segment of the population, in this case, me as a woman. Both issues urgently need to change.

Could the rage I encountered be cultural shame over the prevalence of sexual exploitation? Men must know what’s considered sexually appropriate. I doubt there’s any ambiguity when someone crosses the line, whether it’s sending unsolicited explicit photos, texts, video, or audio, misleading partners into thinking the relationship is something it isn’t for sexual gains, or acting out in nonconsensual online sex.

Why is it unpopular to call out men for bad behavior? Why make it my fault for not walking away or closing the app? The mentality of excusing this as boys being boys seems very much intact, and women continue to be responsible for what happens to them.

When are we going to wake up? What needs to happen for us, especially men, to police ourselves better?

Have we not become better informed about what happens to our psychological agency when threatened? Victim-blaming continues to be prevalent. It occurs any time someone defaults to questioning what a victim could have done differently to prevent a crime.

I’m sure some reading this definition of victim-blaming would love to point out that I wasn’t technically a victim of a crime. True. Yet I experienced an upsetting event that deeply affected me. According to Sherry Hamby, a professor of psychology at the University of the South, most of us subscribe to the just-world hypothesis. We believe people deserve what happens to them since we live in a world that should be just and fair.

Dr. Hamby believes holding victims responsible for their misfortune is partially a way to avoid admitting that something just as unthinkable could happen to you — even if you do everything ‘right.’

That may be true, but I think there’s another underlying assumption at play here.

I shared this same incident with a group of women. Their faces froze, then curled into expressions of disgust and shock. Concerned, they asked how I was doing. They understood.

We, as a society, need to get our shit together in regards to sexual exploitation.

Since the differences in reaction to what happened to me were split along gender lines, could it be that the men’s response reflected their recognition of how easy it would be for them to act sexually and inappropriately? Many wanted to accuse me of criminalizing thought crimes. I hadn’t even made such a suggestion, but that’s how they reframed it. An odd twist.

Many organizations, such as universities, consider what happened to me to be sexual exploitation. They’ve starting taking steps to address unwanted sexual advances by prohibiting such behavior, but we need to do more.

In regards to online nonconsensual sexual incidences, we need to shift the blame and responsibility from the victim to the instigator and hold these individuals accountable.

In regards to that guy? The next morning, I texted the offending individual and said, “Get your shit together and don’t ever pull this on another woman. We are fucking people. Not blow-up dolls.”

He replied, “You’re right. So sorry.”

We need become better educated about the effect of psychological shock on a person’s ability to protect him or herself in a traumatic situation and stop blaming the victim.

We need to become better informed about what constitutes online sexual misconduct and sexual exploitation. Then we either need to get better at holding one another accountable or criminalize such behavior — or both.