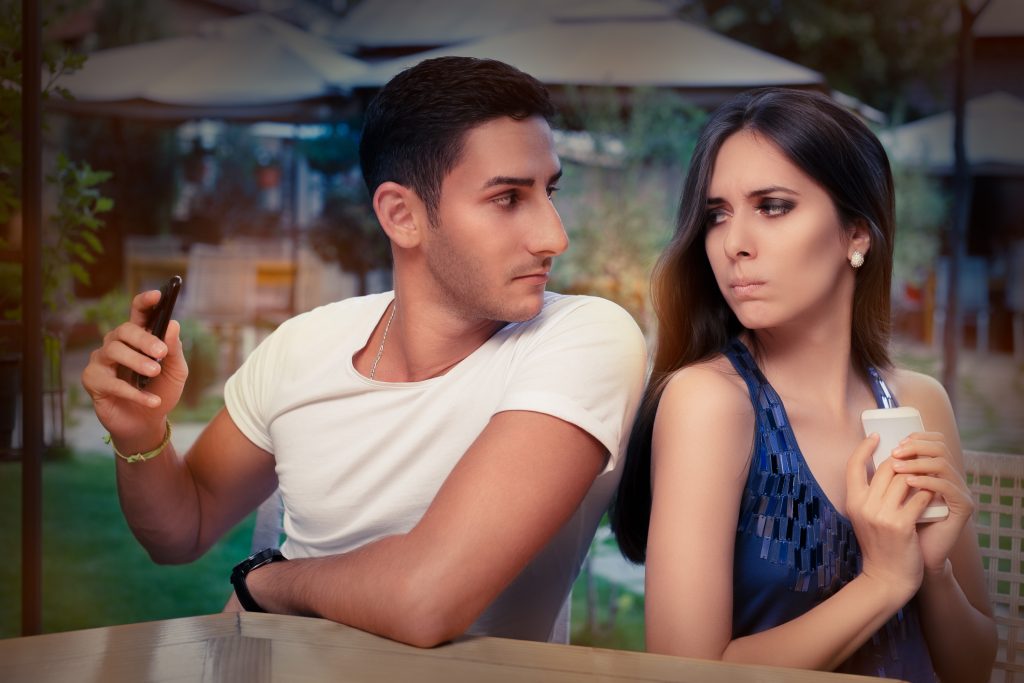 s it ever okay to snoop on someone else’s phone?

This question tends to stir up strong emotions on both sides of the issue. There are those who think trust and respect are paramount in a relationship. Breaking into our partner’s phone or computer violates that trust. In fact, it’s illegal to install spyware and monitor another person’s phone without their permission in twenty US states.

Yet too many people think nothing of playing fast and loose with the hearts of others. Nearly a third of survey respondents already in a committed relationship reported they had engaged in cybersex with someone else. It’s become easy to keep sexual relationships undisclosed and hidden.

In a “Perfect World” scenario, only paranoid crazies and wackos would stoop to snooping on their partner. I used to consider monitoring and surveillance one small step away from acting as the relationship’s thought police.

That is, until I met and married a serial cheater. Up to that point, I thought my stance on cell phone spyware was educated and enlightened. It took a horrible, eye-opening experience to radically change my mind.

I never doubted my late husband.

His phone sat charging on the kitchen counter, ignored most evenings and weekends. He’d occasionally check it to make sure he hadn’t missed an important work call. He preferred to leave his laptop at the office, unless a project demanded overtime.

I trusted him and never once doubted his loyalty to me or our marriage. It never crossed my mind to rummage through his cell phone files, messages, or calls. We had the normal issues common to most longer marriages, but lack of trust wasn’t among them.

Only Neurotic People Snooped, or So I Thought

I never thought I’d stoop to cell phone snooping. It was beneath me. Adults should be able to talk through issues. Only cowards snuck around and spied on their spouses.

That is —until I remarried. It took that painful life lesson to give me a new perspective.

My handsome and wildly charismatic second husband swept me off my feet. He seemed amazing. A match made in heaven. We married nearly a year after meeting online.

I learned later, like a chameleon, he’d learned how to blend into the next relationship. I had no idea he was an accomplished manipulative liar who had a secret sexual life. He fooled everyone, even my friends and family.

The urge to check my new husband’s phone started shortly after our wedding. He had an odd relationship with this piece of technology. Fiercely protective of it, he took it everywhere, even to the bathroom. It was never out of his sight.

Most evenings, he’d spend an hour or so going through his messages. I found it odd that he texted more than me, but what did I know? I was a late adopter of text messaging.

Sometimes he’d laugh and show me a silly meme from a text or two. Little did I know that as we cuddled on the couch and watched TV, he sexted and chatted with other women.

Then I learned he’d cheated. One of the women messaged me and broke the news. She thought she’d met a wonderful single guy, until she’d spotted the wedding photos I’d posted online.

He said our problem was my distrust.

He only lied more. He claimed he’d never done something like this before and wanted help. We entered treatment, where he used deception to hide his continued betrayals. The therapist and I failed to see his apologies and explanations were only a pitiful millimeter thin.

Something continued to feel horribly off. He liked to  start fights so he could storm off in a huff. He needed to see his sponsor, he said, another fabrication.Instead he staged these altercations so he’d have an opportunity to hook up. Money went missing, most likely stolen so he could pay for sexual favors.

He claimed he didn’t understand why I couldn’t trust him. He said he was being faithful and had never worked so hard to save a relationship. I was the one with the problem.

Like any master manipulator, he made me think I was making the whole thing up. His sophisticated lies and gaslighting eroded my grasp on reality and my belief in myself. Up became down; down, up.

Feeling crazier and crazier, I decided I needed proof.

Looking back, I wish I’d left sooner. My suspicions and distrust seemed to be poor reasons to leave. I took my vow to stay for better or worse seriously. I had no idea I’d married a master game player who was only getting better at covering his trail.

It was then that my snooping began in earnest. Slowly I discovered a small trail of breadcrumbs, clues that hinted at something very dark and malicious. And in time, I pieced together the fact that I’d married a con artist.

This experience hasn’t converted me into a fan of cell phone snooping, but if I were faced with this same situation I would do it again. I would pry into my partner’s phone — only sooner, using better spyware. This world, unfortunately, is filled with opportunistic people. Technology has made it easy for partners to have a secret sexual life.

“If something feels wrong, just get out!” is the standard recommendation. That’s not always the best advice. Should we up and quit a job when it gets tough? Do we walk away from difficult kids? Where’s our integrity if we leave when a relationship becomes challenging? Sometimes feelings can be an effective warning system, but sometimes they’re misleading.

So how are we to know when we’re dealing with a deceptive person? Cell phone snooping is a useful tool in such situations.

Snooping on my partner’s phone helped me know I wasn’t crazy.

My partner repeatedly told me he was invested in getting help so he could save our marriage. The severe gaslighting left me confused and shaky. I no longer knew what was true or real. Obtaining evidence helped to substantiate my intuition and strengthened my grasp on reality. Repeated discovery of his deceit strengthened my resolve and gave me the ability to eventually leave.

Omar Minwalla, Psy.D., a leading researcher in sexual addiction, has concluded that a practice of deceptive sexual acting out is abusive and a traumatic violation with severe repercussions on children, partners, and families. His research suggests that sexual betrayal causes a massive fragmentation of reality and a shattering of the injured party’s sense of self. It induces “severe panic, terror, and intense fear, horror, or helplessness” in the betrayed partner.

For those who still believe snooping is unjustified — at what point does it become okay? After I am broke, or worse, dead? What is one of the first things a business does when concerned about possible financial mishandling? Isn’t an independent accountant hired to take a closer look at the financial records? How is cell phone snooping any different?

I firmly believe many traumatized and betrayed girlfriends and wives need some independent form of verification of their partner’s deception. It is not enough to have a therapist or friend say it’s time to leave. We need to know the truth.

Discovering my ex’s text discussions with another woman on how to better avoid detection and on my financial situation brought home the severity of his betrayal. It enabled me to leave.

Snooping on a partner’s phone is a complicated issue.

Yes, snooping could be a sign of insecurity, but it also might be the necessary key to helping an abused partner leave a toxic relationship. Maybe the conversation needs to shift from the pros and cons of this behavior to addressing the issues underpinning such actions. Is it be possible that the focus thus far is actually on the wrong issue?

Maybe we should focus instead on the importance of practicing sexual integrity rather than on the legitimacy of cell phone spying. This conversation becomes moot if, as a society, we do a better job of educating ourselves on the difference between consensual and nonconsensual non-monogamous behavior.

The Common Mistake of Doing Anything for Love

Why I Don’t Hate the Other Woman

My Loved One Abused Me With Invalidation