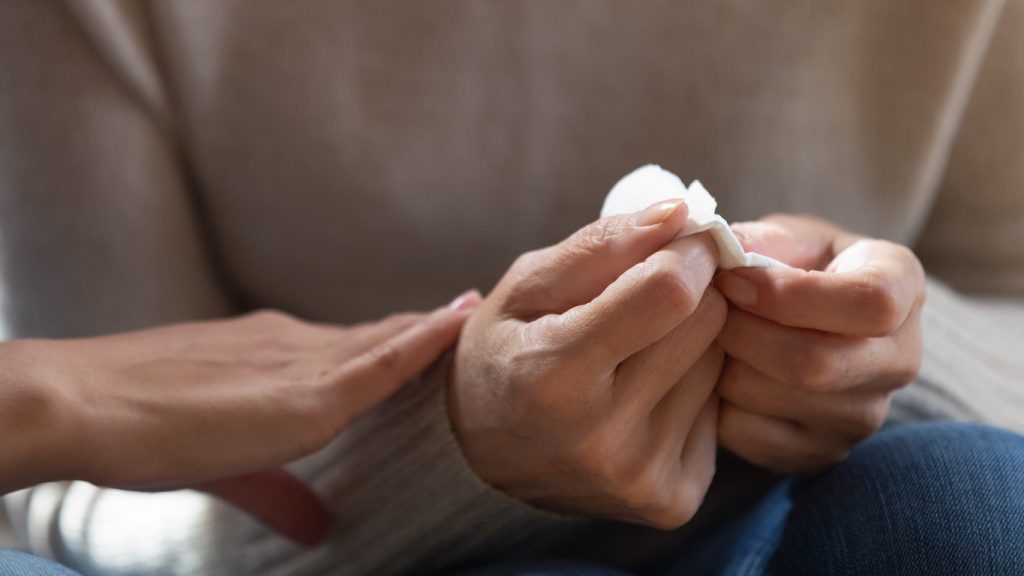 We weren't ready for the anger that often accompanies grief

No one tells you what to expect when an immediate family member sick and most of us are ill-prepared for death.

You’d think everyone would naturally come together to grieve. Pain, however, does odd things to relationships. Since no one likes to talk about losing a loved one, many of us ill-prepared for its occurrence. I did not know the loss of my husband would threaten our family.

My husband and I had been married thirty years when we learned he had a rare small intestinal cancer. Fewer than five thousand people are diagnosed with this condition each year in the United States; too small of a patient group for research or effective treatment.

At the time of his diagnosis, one of our three sons had graduated college and left home for a new job. The other two, aged 21 and 17, lived with us; my youngest, a senior in high school.

For the last five and a half months of my husband’s life, I existed. All of my energy went to managing his growing care as he succumbed to the illness.

He had undergone radical surgery, which required weeks of hospitalization, and returned home a changed man. An uncommon form of dementia slowly stole his logic and decision-making skills.

My sick husband’s needs swamped me

There wasn’t enough of me to go around as I supervised my sick husband, tended to his medical needs, and tried to keep up with household chores. All the while, I grieved the loss of my best friend as the things we enjoyed doing together disappeared.

Cancer was destroying my life, one chunk at a time. My future plans were gone, my life partner was abandoning me, and my family constellation was changing.

I barely functioned, swamped by sorrow. Each day, I struggled to hold it together until I could collapse at night to sob alone in the dark.

I didn’t know how to prepare my family for loss

Then there were my sons.

I had no idea how to help them navigate this catastrophic tragedy. Neither my sons nor my husband seemed to know how to connect enough to say and do the things left undone. An unspoken gulf existed between them.

How was I supposed to prepare these young men for the impending loss of their father? What conversations did they need to have with him before it was too late?

Before I could figure this out, he was gone.

And his presence disappeared from our lives — someone who had been our biggest champion and cheerleader. The person who had encouraged us to pursue excellence.

My sons became fatherless, and I, a widow.

At first, I didn’t realize there’d been a change in the relationship with my adult children. We finalized the estate, and I moved to a new home. It wasn’t until we had to survive our first holidays without him I noticed something was different.

We vacationed in an exotic location for a change of scenery. I hoped it would be a family outing, but my sons kept to themselves most of the trip, leaving me on my own.

Then Mother’s Day and my birthday came and went. The son who lived with me took me out to dinner, but I didn’t hear from the other two. Most of my texts and phone calls went unanswered.

Death had done more than rob me of my marriage; I lost the connection with two of my sons.

Anger is a part of the grieving process

No one had warned me that in our grief, we would become angry. My hurting sons had no one to blame for this terrible pain. I became the easiest target.

Death sends unpredictable shock waves through a family constellation, with unexpected consequences. No one grieves the same, creating an opportunity for misunderstandings.

The possibility that I could lose my family terrified me. I couldn’t bear the double loss; I considered my options. I could nag my kids to keep in touch — something I knew they would resent. Or, I could do my part to stay in touch and hope for a change.

So, I sent regular texts, left voicemail messages, and waited.

Another Opportunity for Change

Five years after my husband’s death, a door opened. The two estranged sons lived together as roommates. One of them became sick and received the diagnosis of cancer. Once again, my family faced another horrible challenge.

I immediately dropped everything and moved to be near the two of them while he underwent treatment.

As we faced this crisis, my sons and I started to talk again. After several painful conversations, there were signs of healing.

We now get together for weekly dinners — something I never dreamed would have happened a few years ago. And we are forging new connections. In some ways, my relationship with my sons has never been better.

We, as a society, need to be better prepared for loss

Culturally we associate grief with intense sorrow. Yes, sadness occurs, but later in the process. No one had prepared my family for the rage we would feel of being robbed of someone we loved. The intensity of this emotion overwhelmed me, and I now suspect fractured my vulnerable family.

Ironically, it took another brush with death for us to heal. I am so thankful that we found our way back together with time, patience, and lots of love.

A Look at the Gaps in Social Services

But we, as a society, need to do more. I wonder what would have happened if my family had gotten professional help or if a mentor, like a teacher or church youth leader, had reached out.

A local organization offered weekly support meetings for cancer patients and their families. We attended one together, but my husband and sons weren’t interested in returning. Should I have insisted on everyone’s participation?

For the last several months, I sought professional counseling, but my kids weren’t interested. Did I make an error not including them?

My husband was admitted early on to hospice. A social worker and nurse made regular home visits, yet didn’t offer family services, most likely a funding issue. Maybe health organizations should consider including such help.

Many church members dropped off groceries and meals. They would turn to leave and there’d be an awkward moment at the doorway. They’d give a sad smile as the silence stretched. Neither of us knew how to bridge the gap created by the tragedy. Too many of us feel ill-equipped to handle emotional topics.

How listening can help those facing such losses

Death and dying is an uncomfortable conversation. Those facing these kinds of losses are in a terribly vulnerable situation. I’m lucky; my family is healing, but how many others don’t recover after a death of an immediate family member?

In hindsight, there are too many gaps in the way we support one another during a natural life event. Yes, this needs to be addressed at an organizational level, but each of us can make a difference.

Most of the time, hurting people welcome the chance to talk. We don’t need solutions; there are none. A listening ear and a comforting hug go a long way in easing pain.

I Had to Helplessly Watch My Son Battle Cancer

The Shocking Gift of Love After Death

The Greatest Life Lesson I Learned from a Dying Man